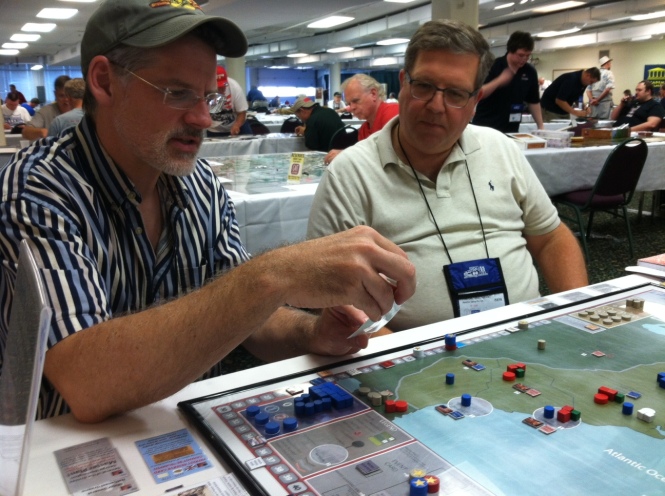 Volko Ruhnke’s first published design, Wilderness War was published by GMT Games in 2001. Wilderness War won a Charles S. Roberts Award for Best Pre-World War II Board game. He followed that with Labyrinth which won the Charles S. Roberts Award in 2010 for Best Post-World War II Board game. His next game kicked off the COIN series. Andean Abyss won the 2012 Charles S. Roberts Best Post-WW2 Era Board Wargame. Built around an innovative system of initiative where the cards that drive play are known to everyone, the game pulls 4 players together to fight for the future of Columbia in the 1990s. Each Faction in the game has asymmetric capabilities and goals driving friends, enemies and frenemies to negotiate to accomplish factional goals. Dice play a minor role in the game with randomness driven by card sequence and player choices.
The game has since spawned a flurry of activity of games based on that COIN system. COIN stands for Counter Insurgency and that was Volko’s original vision for the system. Since then, the system has been used to model ancient campaigns in the Roman-occupied but not-yet-conquered Gaul. COINs Fifth installment is set in the American War for Independence – imagine that. Solo play is driven by a detailed set of flow charts and a loyal cadre of players and developers that love the challenge of beating the bots. Volko’s supportive and kind hand has guided many a team in expanding this system from its Andean Abyss roots.

The excellence and the impact of the COIN series is why we all listen when Volko champions another series. The recent announcement by Voklo and GMT Games of the Campaign and Levy Series kicked off with Nevsky has many a war gamer frothing with anticipation. I start the interview asking Volko to tell us about Nevsky and where the game comes from.

Special thanks to David Blood and the San Diego based band The Experiments for the music behind the podcast.

Games mentioned during the podcast

Empires of the Middles Ages

Hammer of the Scots

Other notables mentioned during the podcast:

Livonia, Rus and the Baltic Crusades in the 13 Cent (East Central and Eastern Europe in the Middle Ages 450-1450) Lam Edition